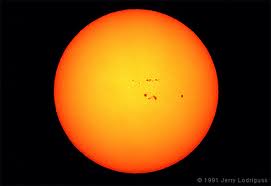 approximately 1.3 Million Earths to fill up the sun.

Chemically, about three quarters of the Sun’s mass consists of hydrogen, while the rest is mostly helium. Less than 2% consists of heavier elements, including oxygen, carbon, neon, iron, and others. The energy output of the sun is about 386 billion Megawatts.

Sunspots are darker, cooler regions on the surface of the sun and when observed closely appear to be like holes in the surface revealing a darker region beneath suggesting that current models of the sun as a fusion generator are flawed.

The solar wind is a stream of energized, charged particles, flowing outward from the Sun, through the solar system at speeds as high as 900 km/s and at a temperature of 1 million degrees Celsius.

The detected boundary of the solar wind is called the heliopause and is estimated to be between 110 and 170 astronomical units (AU;17 and 26 billion km [10 and 16 billion miles]) from the Sun.

Green plants use the energy of sunlight to produce the food sources that feed life on earth. 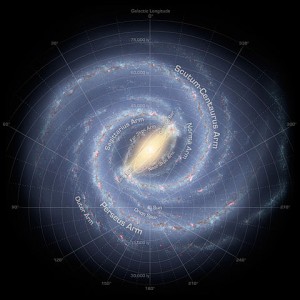 Our sun is one of about 100 billion stars in our galaxy.